Eye Candy and other Wargames Goodness

andy
A Thirty something wargamer! Despite being interested in wargames and figure painting for over 20 years, I've been a painter more than a wargamer! This is an attempt to get more figures on the table, and get rolling those dice - and showing off eye candy for those who like to see pretty pictures of toy soldiers!

The countdown to Partizan begins!

I've not posted anything on here for a few weeks - since February in fact - but that's not to say I haven't been busy!

With only five weeks to go before Partizan weekend, on Sunday 22nd May, it's all systems go for painting and production of figures and scenery. The RAW Gamers are putting on an enhanced version of the 'Somewhere in Scotland, 1650' skirmish game we put on last September, and I'm working away to get units and scenic bits and bobs completed in time. We'll be using the Donnybrook rules again, with added characters and expanded forces to those we used last time.

So, to wet your appetites, and to give a brief snapshot of what I've been up to since February and the previous post, here's a few pictures. I find that blogging takes up valuable painting time in the evenings, so will keep posts to a minimum over the next few weeks, until I've finished, but I just wanted to keep people updated. I'll do a more in-depth post on each unit or item after Partizan, but until then, here goes!:

First up, some camp items - the troops need feeding after all. These were picked up at one of the Derby Shows over the last two years, from Irregular Miniatures. They are listed in the 'siege equipment' section on their website. 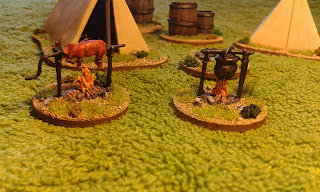 Next, a hastily dug grave. I had some Greenstuff left over from basing trees, so smoothed it into a pile on a Warbases pill-shaped base, and then added a cross made out of balsa strip and superglue. Just right for setting a more sombre atmosphere - it could have been bullet, blade or plague that did for the poor unfortunate victim, and is a definite 'multi-period' item! 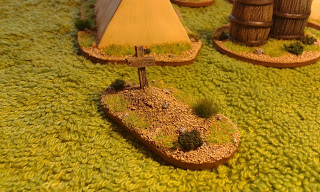 The vegetable gardens were inspired by an article on the Too Fat Lardies blog, and judging by the searches online, it seems as though I wasn't the only one who liked them! The 'flowers' used to make the cabbages were picked up from a shop on the high street, in the materials and craft section, and painted up. Rather convincing, I reckon; though possibly overly large for 28mm scale.....must be good natural fertiliser! They made their first appearance at the last Partizan game, but haven't appeared on here before. I want to add some fences at some point, to keep nibbling vermin out. 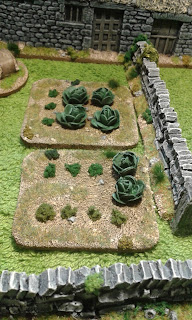 I've always liked The Last Valley's stuff - their scenic items always seem to appear on gaming tables around the conventions, and in many wargames rules and publications. They're good value, and well made too. I bought a couple of their trees at the Derby show last year, and rebased them in my style - a bit pedantic possibly, but now they 'fit' in with the other trees I've made. The flock on the trees was sealed using a non-perfumed hairspray (a railway modeller's tip!), and so far, it seems to be working! 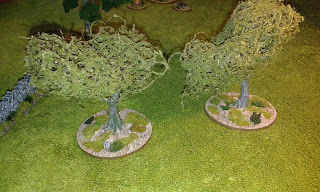 A while ago, I started making my own trees, out of twisted wire frames. These were then based up using a hot-glue gun, and covered in air-drying clay. This was sealed with PVA and painted, then they were based up, sculpting the roots with Greenstuff before adding my usual sand and PVA mix. When everything was dried and painted up, I added some Woodland Scenics foliage. Perfect for small 'gnarly' trees, that wouldn't look out of place in most wargames 'theatres' of conflict, from Scotland to Spain! I'm quite proud of these, as they're totally scratch-built. 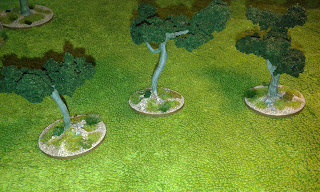 Having completed a unit of dragoons for my Scots faction for the Donnybrook ECW project, which gave me my first faction 'point', it's time to show my next unit, the pike. These chaps have made a few appearances on the blog in recent months, but not in full force. A small unit of 4 figures was on the table at the Other Partizan last September, but now I've finished them all off. It was the figures in plaids that were awaiting completion! (Have I ever said I dislike painting tartan or checked patterns?....) These 8 figures give me a full unit of 'regular' pike, worth another 'point'. 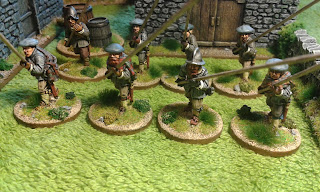 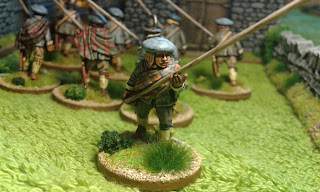 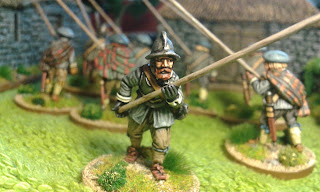 All these pike-wielding chaps are Perry Miniatures. The same goes for my first Scots Musket unit, which gives me another point for the Scots faction.. Again, these 8 figures are classed as 'regular' in Donnybrook terms, and include the very first figures I had painted up for this project when I started it, back in 2014! For ages, I only had these two musketeers, then the dragoons made an appearance, and now finally, this first unit of musketeers has been completed!


Once again, it was the plaid-clad figures that slowed down the completion of this unit, but last Monday, I was able to get them done. The casualty marker in the background is a figure from the Wargames Foundry ECW casualty pack, which I hi-lighted in the last post.

Foundry also provided the figures shown in the last pictures, drawn from their ECW civilians packs.

I really like these figures, and I have a few more civilians to paint up, to populate the settlements that are going to feature in our game.

There's 8 more Scots musketeers to paint, and 8 characters 4 civilians, then a few more bits of scenery - walls and suchlike, maybe some more trees, then I'm done. I'm not sure where we'll be yet at the new 'Partizan' venue, but I'll post before the show with more updates so people can pop by if they wish. After the show, I'll showcase more of the units and bits of scenery, in greater detail. Then it's on to a new project, which readers can follow on here over the summer. Thanks for the continued support, and see you soon! Five weeks to go!... back to the brushes....