Eye Candy and other Wargames Goodness

andy
A Thirty something wargamer! Despite being interested in wargames and figure painting for over 20 years, I've been a painter more than a wargamer! This is an attempt to get more figures on the table, and get rolling those dice - and showing off eye candy for those who like to see pretty pictures of toy soldiers!

Following hot on the heels of the foot for my Donnybrook New Model Army Faction, come the horse. These figures are all classed as Elite troops, and therefore 1 point gets you 3 figures. These guys are equipped with pistols, long swords and carbines, and wear armour. As Elite troops, they use a d10 to resolve firing and combat.


The choice of Captain Hynde as a name was purely random - with all my 'unit' and character names, I've just gone with what sounds good. I wanted these units to be fictional and flexible, so I can use them for any actions of the NMA between 1645 and 1660. (I have, however, prepared a pack of Donnybrook cards for use in a different ECW action that are very much based on fact, but that will be a project for the future.) The figures are all Perry Miniatures, from packs ECW22 and ECW23.They've got a slight angle on the castings, but I can't work out if this is due to them getting bent slightly, or being sculpted like this, appearing to be 'on the move'.....I quite like the latter idea, and it certainly adds an air of motion to the figures. The shaken marker is from ECW12, and more about this chap (and others) can be found here:


The figures were painted up using my usual mix of Wargames Foundry and Games Workshop paints, working from a black undercoat. I used WF Buff Leather 7 on two of the cavalry, and Rawhide 11 on the other. This added a bit of variety to the unit, and it's clear from pictures of Buff coats of the period, that there's lots of difference in shades. I also used Deep Brown Leather 45 quite copiously for boots and equipment. I have to admit that this colour is becoming one of my favourite Foundry colours - there's just enough of a variety in the shade, main and highlight tones to give a nicely balanced and realistic feel. The horses were painted using the Bay Brown 42 and Charcoal Black 34 shades. I was slightly apprehensive about painting these chaps, as horses always seem to be daunting, but in the end, it wasn't too bad. I guess that this is another advantage of skirmish rules, as you don't need too many figures.... as long as you don't want to game with a Mongol horde army! I'm still not convinced about my ability to paint black confidently, but I'll keep persevering and trying new shades or methods.

Once the horse were completed, this meant that my basic 4 point faction for Donnybrook was complete. In a future post, I'll detail ways that I'm going to expand on this, but for now this will do. These chaps have had a mixed bag so far in games - they do fairly well most of the time, but at Partizan they swept round a cart in a dramatic fashion to take on some Scots musketeers, only to meet a sticky end! They did look good though!  These figures were painted between March and September 2015.


Thank you for all the positive feedback, both here and on other forums - it's good motivation to finish off this project, and to share more pictures and ideas. In the future, I'll add some more information about the historical background of my forces and the Dunbar campaign. To close, here's some more pics of the figures, both on their own and in action. Next up will be some scenery and 'fluff', then I'll move on to the Scots! See you soon. 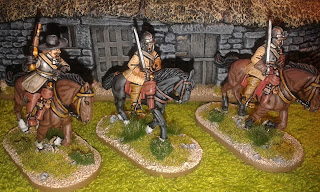 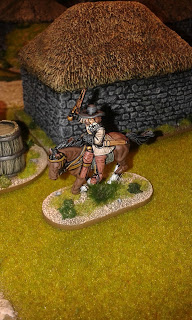 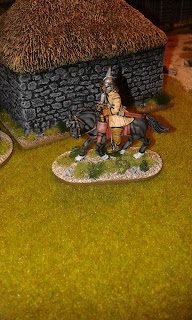 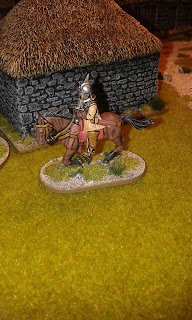 When I envisaged this Donnybrook project, I planned to create two basic factions, weighing in at 4 points each. This is a good place to begin, and gives a nice-sized force on the table - in fact, this is the recommended 'starting' point that the authors suggest in the rules.


Focusing on the English Civil War meant that I had a great amount of scope, in terms of armies and forces that could be represented on the table-top. So when I planned to paint up factions for the Dunbar campaign, it seemed only natural that the New Model Army of 1650 could be represented by the 'Elite' category of troops described in the rules. This gave me the following Faction:

This meant that I had 16 figures in total to paint up, including 3 cavalry. Not a massive undertaking to start with. Throw in some 'shaken' markers, and it was still less than 20 figures! Even with my glacial rate of painting, I might be able to get this faction onto the table in a decent timeframe!


So, how did it pan out in reality? Well, in play-testing, we found that the individual companies were fairly brittle. Troops die easily in Donnybrook, whether they are 'Raw' troops or 'Elite'. With units testing for morale at 50%, losing just two figures as casualties would mean that a 4 man 'unit' could be out of action. The rules allow you to combine points together to make units of between 3 and twelve figures, so I decided to put together 2 points worth of Elite musketeers, into one unit of 8 figures. I've stuck with my 4 figure elite pikemen. This does mean that my infantry aren't that flexible in terms of tactics, only having one 'offensive' unit of shot, and a 'defensive' small unit of pike (depending how you use them, of course!), but the shot will last a bit longer, and won't have to test for morale quite so soon. I've got plans in the future to expand my factions to 6 points, which I'll detail in another post, so that might help with the flexibility issue.

Here, then are the Foot of my New Model Army 4 point Faction, presented in all their glory, in action, and on parade. Painted between February 2014 and May 2015
Next up, the horse!...
﻿

Blimey! Long time, no post! Apologies for that, regular followers and casual droppers by........hopefully this will change over the coming months.

However, progress has been continuing here at Pell Mell Towers, with lots going on since January (the last time I posted!). Over the coming few weeks, I'll update people with progress on my Donnybrook ECW project, which has been ticking along nicely. First up is the progress and completion of Major Hawkins' company of Musketeers. I first wrote about these chaps last October http://haveacare.blogspot.co.uk/2014_10_01_archive.html#6929832098667080127, but they've now been finished off.

﻿
Here is the completed company of 8 figures - worth 2 points in a Donnybrook faction. In the rules, elite infantry can be 'bought' in groups of 4 figures - worth 1 point - and if required you can then combine troops into units of between 3 and 12 figures. After a few play tests, I decided to join together a pair of elite units, to form a bigger company. This means that my faction isn't quite as tactically flexible, having only one unit of musketeers, but it does mean that the musketeers stick around longer, and pack quite a punch, rolling 8 d10s!

These figures are all Perry Miniatures, from packs ECW8, ECW9 and ECW10. They were painted in my usual manner, working from a black undercoat and using Wargames Foundry paints. I've tried to add a sense of uniformity, with most of the troops having Slate Grey 32 breeches, and Granite 31 hose. I then paint some of the figures - normally one in four - with different colour breeches or hose. The same principle is carried out with the equipment using standard leather-like and 'natural' colours. So for instance, I'll paint three figures with Buff 7 baldrics, then the fourth has a different colour such as Conker Brown 54. This gives units a standardised, well-equipped feel, but with a natural variation. It also means that figures can be painted up quicker as well - always useful!


Next up will be shots of the complete company on parade and in action, so here's just a teaser of how they look together....


Until next time! See you soon.